If These Walls Could Talk

Leonidas “Flossie” Widger opened the 1-room Silver Grill Cafe in 1933. Legend has it a hungry sign painter came up with the name and painted it on the window for a pork chop lunch. For 16 years Flossie ran the downtown diner, serving meals to farmers and blue-collar workers. After he sold it in 1949, The Grill changed hands several times.

On Valentine’s Day 1979, John Arnolfo and then partner Mike Gress purchased the 1-room, unheated diner. Mike later left for another opportunity and they remain close friends today. Over the years John expanded Silver Grill into the four old buildings next door.

During each expansion, he carefully retained key architectural elements. In the Lower Downtown room are original ‘ghost signs’ for Land and Livestock (1913) and a Real Estate/Insurance office (1922) painted on the brick wall.

After 42 years as owner, John sold the diner to Alan and Jackie Jantzen in 2021. “They’re a perfect fit to carry the legacy forward,” he said. For decades before Silver Grill, Alan oversaw operations at four popular Fort Collins restaurants. Now at The Grill, one of their goals is a big one: sell 1 million cinnamon rolls in the next 5 years. Do it!

When John Arnolfo purchased the Silver Grill in 1979, the 1-room diner sat just 40 customers. For 7 years it struggled. Back then, cinnamon roll franchises were the rage. John wanted to be Old Town’s Cinnamon Roll King.

In 1986, John starting to collect recipes from family, friends, and cookbooks. Each one started with a sweet dough made from basic ingredients. Eventually he combined a 1969 Better Homes & Gardens recipe with others. His cinnamon roll journey had begun.

He was proud as a peacock pulling his first batch out of the oven. But the 18 cinnamon rolls were hard as hockey pucks. He played with the recipe and they got better. Soon he was baking 36 rolls a day. Within 3 months demand outpaced his ability to bake enough. He needed a baker.

Russ Hamilton, a retired German hand baker, answered John’s ad and taught him how to bake the ultimate cinnamon roll. Within a year, John was baking dozens of rolls a day. The diner started booming, allowing him to save enough money to purchase the adjoining building and double The Grill’s size. As they say, “The rest is history.” 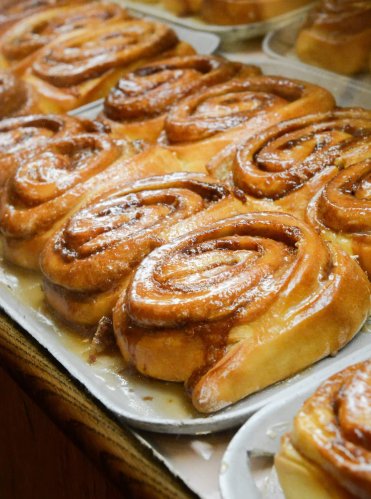